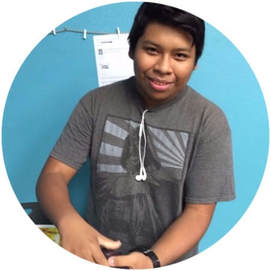 Isay is a senior at Hamilton High School this year.

A mainstay on his high school campus, Isay shows up every day, works hard, and encourages his peers to take their academics seriously. He is active in local community service projects with Big Citizen Hub, and he also joined the UCLA After School program and volunteers as a nutrition and health coach for kids at a nearby elementary school. This year, Isay became the first Student Ambassador for CIS's XY Zone leadership group for young men. He is on track to graduate in June 2017, and has high hopes for his future beyond high school.

When Isay was in the ninth grade, his life looked a bit different. When his site coordinators met him, he was often skipping class, had no real motivation to keep his grades up, and had yet to find a group of people who pushed him to reach higher. His site coordinators Ms. Christine and Mr. Matthew took him on several CIS field trips – like an incentive-based trip to a Clippers game – that would interest him while also showing him the value of showing up and working hard. They then connected him with a community mentor and signed him up for the XY Zone program, which emphasizes the "5 R's" of responsibility, respect, role modeling, reaching out, and relationships.

With a lot of hard work, as well as help from his new team of supporters on campus, Isay has improved tremendously over the past three years. His grades are now on track – he has moved from a 1.50 GPA freshman year to a 3.0 GPA at the start of 12th grade – and he has exhibited greater self-control and responsibility each year. He has built a core of positive relationships with a dependable peer group in his fellow CIS students. He has become a leader and role model to many fellow students, inspiring them with his journey.